Miklain Hardy
Age: 22
Years played: 8 years, 4 years for Waterford, 3 for Skyline, and 1 for the University of Detroit Mercy.
Fav lax experience: Taking state my senior year against Park City or making it to our conference championship game in college or the time we were beating Ohio State for a few minutes haha.
Color: PINK!!!! Pink, and more pink.
Pregame ritual: I used to listen to Smooth Criminal (Ft. 2CELLOS), my brothers taught me that, cutting and braiding my Jedi braid, taking a sip of red bull and usually having my mom roll out my calves even though I hate it.
Pregame food: I can’t eat right before a game but a protein shake, I just have to give myself enough time. I would always eat energy gummies though.
Band or Artist: No lying here, I listen to anything EFY!
TV show and movie: Heartland, and Forever Strong or Blind Side.
Most difficult thing about playing: Mental. It is all mental for me. If I miss the first shot I would have a bad game, but if I made the first shot I would be on fire!! I used to struggle really bad with this but I was able to mostly overcome it. My mom would always yell “Find it” to help me snap out of it and regain confidence.
Something interesting most people don’t know: I was born in a car… my parents say I am impatient!
What I want to be when I grow up: Seminary teacher and a Mom!
My favorite hobby outside Lax: Running and Horse riding!
Pat Cook Assistant Varsity, Former Boys Lax and Girls Jr. Lax
David Oka Varsity Coach 2007-2009 JV, 2010-Present Varsity Head Coach

Age: 24
Years played: 6, 2 for Riverton, 4 for BYU
Fave lax experience: Definitely going undefeated in our Georgia Tournament! 3/4 teams we played were top 10. One game we were down 10 at half time and came back to win. We also had to play three games in one day because the previous night we ended up hanging out in a Tornado shelter. I could relive that tournament again and again. Our team played SO well together!
Color: Pink, or Turquoise
Looking forward to: Helping girls develop a passion in lacrosse like I have.
Pregame ritual: I always do the team cheer with the head of my lacrosse stick up, and everyone else's is down.
Pregame food: Cliff gel energy blocks- they shouldn't be allowed because they work miracles.
Band or Artist: I'll be honest... Taylor Swift.
TV Show and Movie: Modern Family... Baby Mama, Pitch Perfect, 500 Days of Summer
Most difficult thing about playing: Actually a lot of difficulties- lack of support from school, not starting or getting as much playtime as you would like, having a bad game.
Something interesting most people don't know: I held (hold?) the record for RHS girl's pole vault. Haha. I wasn't good at all, I was just one of the few girls who tried it.
What I want to be when I grow up: Something. I am working in a treatment center for troubled teenage girls right now and love it. I think I will always be working in this field. 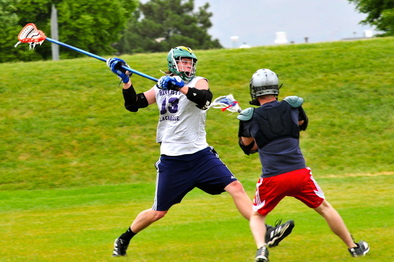 1.  Age:  25 birthday is June 11th.
2.  Years played lacrosse, for who and specific years played: 2002-05 played for Riverton High, '05-'06 Played for UVU
3.  Favorite Lacrosse experience: Playing in the state championship game my senior year. another favorite i have is while i was playing high school my coaches always accused me of being "soft" and "not physical enough". Well i didn't like that too much, so our next game  we were playing Judge Memorial, who at the time had a pretty good team, the game went into sudden victory overtime. they had the ball and just rang a shot off of the side pipe only to get the ball back. The kid who picked the ball up turned and started to attack the cage. Well, as he was running in all i could think about was how my coaches called me soft and not physical enough and i decided i was going to shut them up forever. So as he ran towards the goal i ran at him. i met him about 15 yards away from the goal and put my shoulder into his chest and drove him into the ground. i jumped up looking for the ball and he didn't move. He ended up having temporary paralysis and had to be taken off the field in an ambulance. My favorite moment wasn't injuring the player but shutting up those who said i couldn't do "it".
3a. Favorite color:  Blue, maybe green. oh and of course purple, silver, and black!
4.  What you like or look forward to about coaching RHS girls lax:  my favorite part about coaching is getting to know the girls and watching them have fun.
5.  Favorite pregame ritual:  as a lax player Listen to some pretty intense music and not talk to ANYONE for an hour before the game.
6.  Favorite pregame food: Whatever i could find and eat before i had to leave for the game.
7.  Who is your favorite band or Artist? Ben Gibbard and his many bands. i.e. Death Cab for Cutie, Postal Service, Benjamin Gibbard, and many others
8.  Favorite TV show and Movie: Modern family hands down. Greatest show ever! its a toss up between 'The Last Samurai', 'Oceans 11', and the Toy Story trilogy, yes i classify it as a trilogy.
9.  Most difficult thing about playing Lacrosse:  Conditioning. Stay in shape!!
10. Something interesting about me that most people don't know:  I am incredibly accident prone. i get injured doing many things, my body has just become accustomed to the constant pain and injury that it just feels normal now. Also, I can't sing, dance, paint, or draw. i am one of the least artistic people alive. although i would love to be able to do any/all of those things.
11. My favorite Hobby outside Lax:  Pretty much any sport, playing or watching. Hiking, snowboarding, and anything else outdoors
12. What do you want to be when you grow up?  My ending goal is to be a CEO or CFO.